In this clip Peter Drucker talks about Japan and his work there as well as the work of W. Edwards Deming and Joseph Juran.

His discussion highlights how he remembers the Japanese were so willing to take new ideas and implement them immediately. There was not a reluctance to try things that “were not invested here.” They were also ready to abandon ideas if they were tried and didn’t work.

Drucker talked about the shared importance he, Deming and Juran put on the importance of valuing all employees and creating management systems that capture all the value they can offer. He spoke of all 3 of them tilted against those that believed in command and control business organizations. Sadly the lack of respect for all workers is still common today; but it is much better than is was due to the work of these 3 management experts.

In this clip Drucker mentions Just-In-Time works well for Toyota but companies trying to copy it find it doesn’t work for them because they are trying to install it on top of a system that doesn’t support it. The exact same point was made in a clip I posted in my post on Monday to the Deming Institute blog.

GM wouldn’t be in the pickle its in if it hadn’t pour $40 billion in automation before, without, analyzing the work process which is just wasting $40 billion. Thats why GM is in trouble today.

END_OF_DOCUMENT_TOKEN_TO_BE_REPLACED 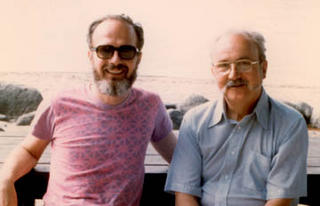 Dr. George Box is not as well known in the general management community as his ideas merit (in my biased opinion – photo of Bill Hunter and George Box). He is well know in the statistics field as one of the leading statistical minds. Box on Quality is an excellent book that gathers his essays from his 65th to 80th year. The book has just been issued in paperback (which helps as the hardback was pricey).

While some of the essays are aimed at a reader with an advanced understanding of statistics, many of the articles are aimed at any manager attempting to apply Quality Management principles (SPC, Deming, process improvement, six sigma, etc.). An except from the book provides a table of contents and an introduction.

Some of the articles from the book are available online. I encourage you to take a look at several of the articles and then go ahead and add this book to your prized management resources, if you find them worthwhile.

> 1. Are people getting most of their information
> from other sources?
That would be my guess.

Similar to the phenomenon of “the long tail” which is an interesting topic in its own right. We tend to focus on the popular few (books, musicians, movies, authors, computer programs…) but often the sum of the less popular many is more significant. See:

Getting back to the question raised by the “Who Influences Your Thinking” post; More importantly I believe they (we) are just failing to get all we should.
END_OF_DOCUMENT_TOKEN_TO_BE_REPLACED