This lean thinking webcast from India actually does a pretty decent job of providing an overview (for a business TV channel) even if they get some things a bit confused. The discuss TQM in India preceding lean which is an accurate view in my opinion – quality management shared many lean principles. They even talk of lean at Ford doing lean first. But they get the decades for that a bit off. They seem to mash together the “quality is job one” refocus on quality lead by Dr. Deming in the 1980’s with Henry Ford in the early 1900’s.

India’s Economic Times has an interview with James Womack, Now is the time for lean management, with an interesting quote:

When I last visited India in 2002, I looked carefully at several operations of the TVS group in the Chennai area. I found that they were the best examples of lean manufacturing I had ever seen outside of Toyota City. In my mind these facilities completely eliminated any questions as to whether “lean” would work in India. However, I have not visited India in six years and I have no data on the performance of Indian firms on average, so I can’t say what the trend is or how many success stories I might find if I had the time to visit at length. How-ever, I have high expectations for the potential of Indian firms to embrace the full range of lean principles and methods.

I have discussed TVS several times in the past; TVS has won several Deming Prizes.

From lean tools to lean management [the broken link was removed] by Jim Womack:

The attraction of tools is that they can be employed at many points within an organization, often by staff improvement teams or external consultants. Even better, they can be applied in isolation without tackling the difficult task of changing the organization and the fundamental approach to management. I often say that managers will try anything easy that doesn’t work before they will try anything hard that does, and this may be a fair summary of what happened in the Tool Age
…
Teach all managers to ask questions about their value streams (rather than giving answers and orders from higher levels). Turn these questions into experiments using Plan-Do-Check-Act.

Only management by science through constant experimentation to answer questions can produce sustainable improvements in value streams. ( Toyota’s A3 is a wonderful management tool for putting science to work.)

He is right. The tools are useful. The much more significant changes are in the management suite not on the shop floor (or cubicle farm). Even on the shop floor there is room for huge amounts of improvement. In the c-suite I don’t know how to explain the amount of work left to do. Lets say this – there is much much much more improvement left to do than has been done so far.

From the Lean blog another valuable podcast: Lean in China with Jim Womack. He is not impressed with the state of lean in China yet. Lean Enterprise China [the broken link was removed] has been established to aid the adoption of the best management practices in China.

What makes this claim so extraordinary is that Japanese companies, led by Toyota Motor Corp., are thrashing Ford by building vehicles in North American factories with North American-made parts and North American workers, who receive American-style wages and health benefits. And increasingly, these Japanese brand vehicles are engineered in America by Americans.

In fact, thanks to hiring by Japanese, Korean and German auto makers, total employment in the U.S. motor vehicle industry over the past decade has held steady at about 1.1 million.

The problem for American car companies is pretty clearly poor management. Toyota, and others, builds cars in America profitably.

Paying for health care, as Womack mentions, is a significant problem. The high cost of the existing health care system has been known to be a burden on the American economy for decades but politically it has been preferable to delay taking action. At some point that will change and the systemic problems will be addressed. Knowing this, the US auto companies still overpromised in the last few decades and now must cope with the decisions they made.

END_OF_DOCUMENT_TOKEN_TO_BE_REPLACED 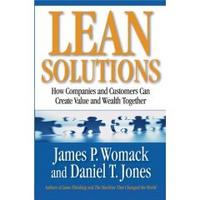 The whole idea of lean solutions is to start with today’s customer in today’s circumstances and ask what the customer really wants. When we do this, the first thing to note is that manufactured goods have gotten vastly better, somewhat cheaper

James Womack also lists the six principles of Lean Solutions which seems to be boil down to one of the principles: “Get me exactly what I want” (though the way he describes this seems to be different than I read those words – “The proposition of retailers and other providers of goods from stock is that you can always find any of the items they have on offer”). That concept in then clarified by explaining what people want, such as: “don’t waste my time,” “Solve my problem completely,” give it to me when and where I want…
END_OF_DOCUMENT_TOKEN_TO_BE_REPLACED

Teaching the Big Box New Tricks (bozos at Fortune deleted the web page so I deleted the link) – What Toyota knows about supply chains – and how to apply it to almost anything, even megastores – from Fortune.

At the RDC, cola is now received directly from the supplier’s bottling plant in wheeled dollies. They are rolled directly from the supplier into the delivery truck to the stores. And once at the stores, the dollies are rolled directly to the point of sale, where they take the place of the usual sales racks. This innovation eliminates several “touches,” in which employees moved cola from large pallets to roll cages, to the stores, and then onto dollies to reach the shelves, where they were handled one last time. (In drawing their provision-stream maps of the original process, Tesco discovered that half its cost in operating this provision stream was the labor required to fill the shelves in the store.)

Based on material from Lean Solutions: How Companies and Customers Can Create Value and Wealth Together, by James P. Womack and Daniel T. Jones.

> 1. Are people getting most of their information
> from other sources?
That would be my guess.

Similar to the phenomenon of “the long tail” which is an interesting topic in its own right. We tend to focus on the popular few (books, musicians, movies, authors, computer programs…) but often the sum of the less popular many is more significant. See:

Getting back to the question raised by the “Who Influences Your Thinking” post; More importantly I believe they (we) are just failing to get all we should.
END_OF_DOCUMENT_TOKEN_TO_BE_REPLACED