When you hear about rock musicians having a clause in their contract that they must have a bowl of M&Ms in their dressing room with all the brown M&Ms removed you could be excused for thinking: what will these crazy celebrities do next. Well it might just be those crazy celebrities are using visual management (granted I think there could be better methods [a bit more mistake proofing where the real problems would be manifest] but it is an interesting idea). Basically if they didn’t have the bowl of M&Ms, or if the brown M&Ms were not removed, they could distrust the thoroughness of the contractors. And they would check to see what other, actually important, contractual requirements were not followed.

The staff at venues in large cities were used to technically-complex shows like Van Halen’s. The band played in venues like New York’s Madison Square Garden or Atlanta’s The Omni without incident. But the band kept noticing errors (sometimes significant errors) in the stage setup in smaller cities. The band needed a way to know that their contract had been read fully. And this is where the “no brown M&Ms” came in. The band put a clause smack dab in the middle of the technical jargon of other riders: “Article 126: There will be no brown M&M’s in the backstage area, upon pain of forfeiture of the show, with full compensation”. That way, the band could simply enter the arena and look for a bowl of M&Ms in the backstage area. No brown M&Ms? Someone read the contract fully, so there were probably no major mistakes with the equipment. A bowl of M&Ms with the brown candies? No bowl of M&Ms at all? Stop everyone and check every single thing, because someone didn’t bother to read the contract. Roth himself said:

“So, when I would walk backstage, if I saw a brown M&M in that bowl . . . well, line-check the entire production. Guaranteed you’re going to arrive at a technical error. They didn’t read the contract. Guaranteed you’d run into a problem. Sometimes it would threaten to just destroy the whole show. Something like, literally, life-threatening.” Anscombe’s quartet: all four sets are identical when examined statistically, but vary considerably when graphed. Image via Wikipedia.

Of course we also have to be careful of drawing incorrect conclusions from visual displays.

For all four datasets:

Edward Tufte uses the quartet to emphasize the importance of looking at one’s data before analyzing it in the first page of the first chapter of his book, The Visual Display of Quantitative Information.

Data is often displayed poorly, making it difficult to see what is important. When data is displayed well the important facts should leap off the page and into the viewers mind. Edward Tufte is an expert on this topic with great books. If you have not read them, you should: Beautiful Evidence, The Visual Display of Quantitative Information, Envisioning Information and Visual Explanations.

Smashing magazine has some nice examples of good display techniques in Data Visualization: Modern Approaches. I don’t like all the examples they show but it does provide some help by showing some creative ways to display data.

How to get people to actually use instructions for using your product: make it easy to do so. This blog post illustrates a well designed instruction guide for the Seagate FreeAgent backup drive. Simple pictures make it very obvious what to do (and even includes a time stamp showing how long into the process you are – which shows you the total time it will take at one simple glance 1 minute and 36 seconds).

[I replaced the embedded video, since Google broke the original link with the way they shut down Google Video after buying YouTube]

In Myths About the Developing World, Hans Rosling shows some great graphics to display data on health care outcomes. This is one of the talks from the great TED conference that we have mentioned before. They really have some great webcasts available on their site.

The presentation also gives a concrete example of faulty knowledge (people thinking things which are not so – related to theory of knowledge). He also makes good points on stratifying data at the 14 minute mark. See gapminder.org for good additional material. 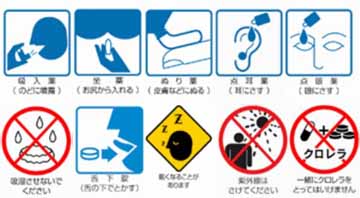 The Risk/Benefit Assessment of Drugs-Analysis and Response (RAD-AR [the broken link was removed]) Council of Japan has released a new batch of pictograms for use on pharmaceutical packaging. No more deciphering complicated dosage directions and warnings — a glance is all it takes now.

See all the pictographs [the broken link was removed]

I don’t understand all the pictographs. If these are helpful in Japan, (assuming others in the USA see it the way I do) it might be an example of how a good idea would has to be modified to apply elsewhere. It also might be that at first we need to develop localized version but it would be helpful to move toward a universal system of pictographs to the extent possible.

Orignal article (in Japanese) [the broken link was removed]

Effective visual signals are important for effective management improvement: lean thinking emphasizes such ideas. Top 5 Rules of Effective Measurement Boards is an excellent post on how to make measurement effective.

Take the time to find the important measures and then don’t keep data hidden in some drawer or computer file out of people’s view and therefore out of mind. Post the important data for everyone to see. Review the data as changes are made and see that the changes had the desired result. Update the measures when appropriate (for posting visibly – you will of course be measuring more than the few measures that belong on measurement boards).
END_OF_DOCUMENT_TOKEN_TO_BE_REPLACED

Via Got Boondoggle? Shorter Text for Visual Work Instructions (link broken 🙁 so removed) by Steven Blackwell:

In writing minimal text, we recommend the sentence structure, “Verb NOUN with NOUN using NOUN.” An example is given in the following illustration, “Cut CABLE to LENGTH as shown using SCISSORS.” That includes 8 words, as opposed to 82 in the original example, only 10% of the original length.