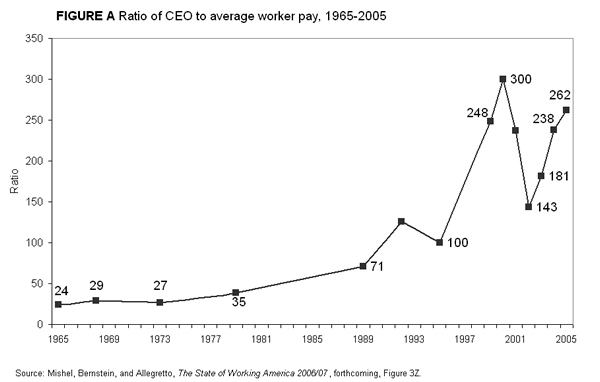 Unfortunately this reverse robin hood (steal from the workers, stock holder, customers…) and give to the CEO tale continues. Hopefully someday soon we can at least turn the momentum in the right direction (stopping these incredibly excessive “pay” packages). Even then it will take quite a deal of reducing these ridiculous “pay” packages to reach some sense of decency. CNN article based on the report: CEO Paycheck: $42,000 a day by Jeanne Sahadi:

The CEO-to-worker pay differential in 2005 was the second highest on record. The highest was 2000, when the average CEO earned 300 times what the average worker made.

In 2002, the differential fell to 143 as the bear market took its toll on stock-related compensation. Nevertheless, between 2000 and 2005, median CEO pay rose 84 percent to $6.05 million on an inflation-adjusted basis, according to EPI.

Excessive Executive Pay – link to a study with even more obscene data than that in the graph above. CEO Pay: Obscene from Apr 2005