As I said in a post a few years ago on respect for people and Taiichi Ohno‘s sometimes very aggressive style:

The difference between respect and disrespect is not avoiding avoiding criticism. In fact often if you respect someone you can be much more direct and critical than you can with someone you treat as though they don’t have the ability to listen to hard truths and improve. I think we often have so little respect for people we just avoid dealing with anything touchy because we don’t want to risk they won’t be able to react to the issues raised and will instead just react as if they have been personally attacked.

he had such a high expectation of the staff and managers under him. If they were not doing something the right way, he would explode. And when he exploded, he really would explode.

But for those who came to him and really asked for help, he was very patient. He wouldn’t give them the answer, but preferred to provide them with enough of an understanding of the situation, as well as help on how they could deal with the problem. So he was very much a teacher and a leader.

I would say that while Taiichi Ohno was truly remarkable that doesn’t mean he did everything right. And he might well have failed to communicate in a way that conveyed respect for people fully, when he exploded. He was great, but his methods could also be improved. At the same time some extent showing some fire may be helpful at times to get people to take things seriously (avoiding the need for this is even better, but not everything will be done as well as it possible can be).
END_OF_DOCUMENT_TOKEN_TO_BE_REPLACED

The 1,300-acre plant, in which Toyota has invested $5.3 billion, produces a car roughly every minute. Georgetown’s population has doubled. In fields where farmers once grew tobacco and raised cattle, McMansions, apartment complexes, and condominiums have sprouted. A 150,000-square-foot upscale retail center is rising near the Toyota plant, the better to serve its 7,000 employees.
…
In San Antonio, the Toyota Tundra plant lay idle for three months this fall, though Toyota hasn’t laid off anyone. Instead, according to Richard Perez, president and CEO of the Greater San Antonio Chamber of Commerce, Toyota offered the city “a whole bunch of folks who need to get busy.” (San Antonio put them to work on beautification projects.) Of course, Toyota has resources to act in a more paternalistic manner – in part because the parent companies aren’t saddled with the burdens of providing health care and retirement for workers in home markets.

This is not behaving in a paternalistic manner, this is behaving in an honorable manner with the other long term stakeholders that have a shared interest in the long term success of the company. When managers and executives do their jobs the company will succeed in good times and have a plan for bad times and will deal effectively with obvious long term issues. Health care costs, pensions costs, and bad labor-management relations have been obvious critical issues to solve for GM, Ford and Chrysler for decades. The pathetic job those 3 have done with those, and other issues (they still don’t understand how to work with suppliers, how to stop the obsessive focus on quarterly profits, how to demand honorable behavior [not looting] from senior executives…), lead to their current situation.

The poor economy leads the the situation you now see with Toyota and Honda: profits being cut, having to put in place plans to retain employees while they are not needed to produce output today, etc.. You don’t see companies needing billions to survive a few months unless they were incredibly poorly lead. And those leading them were paid many times more than those that led Toyota and Honda. They have had decades to act responsibly. They have failed. And there failure will be felt by those that enabled them to take huge pay packages that were not warranted. They should be ashamed.
END_OF_DOCUMENT_TOKEN_TO_BE_REPLACED

I do not like the actions of many in “private equity.” I am a big fan of capitalism. I just object to those that unjustly take from the other stakeholders involved. It is not the specific facts of this case, that I see as important, but the thinking behind these types of actions. Which specific actions are to blame for this bankruptcy is not my point. I detest that financial gimmicks by “private capital” that ruin companies.

Those gimmicks that leave stakeholders that built such companies in ruin should be criticized. It is a core principle that I share with Dr. Deming, Toyota… that companies exist not to be plundered by those in positions of power but to benefit all the stakeholders (employees, owners, customers, suppliers, communities…). I don’t believe you can practice real lean manufacturing and subscribe to this take out cash and leave a venerable company behind kind of thinking.

Much of the blame for its demise lies with three private equity titans: Cerberus Capital Management, Sun Capital Partners, and Lubert-Adler.

When those firms bought Mervyns from Target for $1.2 billion in 2004, they promised to revive the limping West Coast retailer. Then they stripped it of real estate assets, nearly doubled its rent, and saddled it with $800 million in debt while sucking out more than $400 million in cash for themselves, according to the company. The moves left Mervyns so weak it couldn’t survive.

Mervyns’ collapse reveals dangerous flaws in the private equity playbook. It shows how investors with risky business plans, unrealistic financial assumptions, and competing agendas can deliver a death blow to companies that otherwise could have survived. And it offers a glimpse into the human suffering wrought by owners looking to turn a quick profit above all else.

This plan has been repeated over and over, for decades. People buyout a company, strip off huge amounts of cash for themselves, leave the company in extremely precarious position by piling on all sorts of debt which kills cash flow. This is even taught in business schools as how things should be done (although I think many business schools have cut back on promoting this type of behavior). The attitude of some is: “look at this silly company, they are not leveraged, go buy them take a bunch of cash out and they might actually stay in business for the long term, but what do we care about that we can get a bunch of cash now and pay ourselves millions who cares what happens to all those (employee, suppliers, customers…) that build up the company.”

In this case in addition to piling on all sorts of debt the buyout firm split off the real estate from the rest of the company and then doubled the rent charges – adding another cash flow drain on the company.

Cerberus also bought out Chrysler and now seeks billions from the government to help them out. 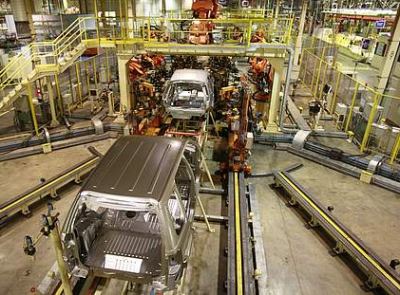 Brazil’s Camaçari plant is model for the future

This state-of-the-art manufacturing complex in the northeastern Brazilian state of Bahia is not only the centerpiece of Ford’s Brazilian turnaround plan, it is also one of the most advanced automobile plants in the world. It is more automated than many of Ford’s U.S. factories, and leaner and more flexible than any other Ford facility. It can produce five different vehicle platforms at the same time and on the same line.
…
At Camaçari, more than two dozen suppliers operate right inside the Ford complex, in many cases producing components alongside Ford’s main production line. Having those supplier operations on-site allows Ford to take the concept of just-in-time manufacturing to a whole new level. Inventories are kept to a bare minimum, or dispensed with entirely. Components such as dashboard assemblies flow directly into the main Ford assembly line at the precise point and time they are needed.
…
Unlike many U.S. auto plants, where workers’ responsibilities are strictly limited to specific job classifications, workers like Silva dos Santos are encouraged to learn as many different skills as possible.

Here is an interesting video [the broken link was removed] on the plant. It is sad how poor management at GM, Ford and Chrysler has created such a bad situation for those working at those companies, their suppliers, the communities that support their production… GM and Ford had the advice they needed to succeed from Deming in the 1980’s but they chose to focus on the short term, large executive payments, accounting gimmicks instead of continual improvement…

END_OF_DOCUMENT_TOKEN_TO_BE_REPLACED

It all started a week before, when the CTO of Damon’s midsize warehousing and transportation company in Northern California announced an innovative program to motivate employees and boost the quality of their logistics software. For every bug found by a tester and fixed by a programmer, both would get $10.

Well, this doesn’t sound very well thought out. Bonuses often distort behavior. Dr. Deming was not against such targets and bonuses because he thought they would not result in bugs being fixed: Dr. Deming on the problems with targets or goals. It is a question of how that will happen. The system being distorted is the most likely result of any such system.

Everyone worked a bit harder the next day. Testers made sure to check and double-check every test case they ran, while developers worked through lunch to fix their assigned bugs. And it paid off. On that second day each had earned an average bonus of $50.

Everyone worked even harder on the third day. On the fourth day, however, the well had started to dry up. The testers ran, re-ran, and re-ran again the test cases, but they could only find a handful of issues. The developers strained the issue-tracking system, constantly reloading the “unassigned bugs” page and rushing to self-assign anything that appeared.

END_OF_DOCUMENT_TOKEN_TO_BE_REPLACED

My comments on: No Problem Without a Solution [I removed the broken link]

I understand that most managers feel that their employees should not bring them problems. Instead, expressed in the most positive way, employees should fix things or bring possible improvements. However, I think that is poor management.

I understand there may well be more detail than you provide that adds a more sensible (but more complex) reaction that stated in your post about your situation. However, there are many example, of bosses that expect their people not to bring them “bad news” not to bring them “problems” and that attitude is exactly wrong in my opinion.

What they are saying is: if you know of a problem but don’t know of a solution I would rather we continue to have that problem than admit some of my staff don’t know how to fix it (and then have to deal with it myself – maybe then having to accept responsibility for results instead of just blaming you if I am never told and there is a problem later…). I think that is setting exactly the wrong expectations.

Employees should fix things. They should bring solutions to managers to improve things that might be outside of the scope of the employees ability to fix. But if they know of a problem and not a solution and a manager tells the employee they don’t want to be brought problems then I don’t want that manager.

If an employee never learns how to find possible solutions themselves that is not a good sign. But it is much, much better to bring problems to management’s attention than to fail to do so because they know the manager thinks that doing so is weak. It is the attitude that problems are not to be shared that is weak, in my opinion.