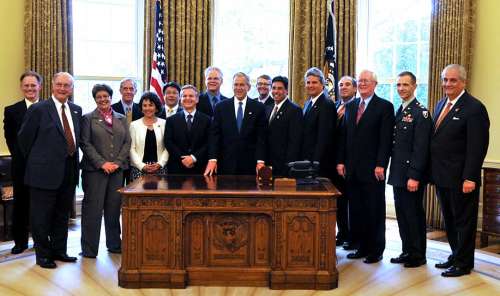 The Baldrige National Quality Award winners for 2007 are:

President Bush met with winners for the first time since 2000, I believe (photo from Coral Springs web site). He did in private this year in the Oval Office. The Baldridge award had more prestige in the management community 10 years ago. In my opinion the award has failed to attract the best managed companies to apply.

When you purport to recognize the highest level of management excellence you should understand that leaving out those companies that are widely seen as excellent calls into question the credibility of the award. I can understand the challenge in convincing many potential applicants to apply. I would say that is the same challenge companies have that want to convince potential customers their solution is what the customer should purchase.

ARDEC provides a public version of their application [the broken link was removed] (some details removed) that is interesting. ARDEC received the President’s Award Quality in 2000. From 1998 to 2002 the President’s Quality Award [the broken link was removed] recognized management excellence in the federal government based on a Baldrige-style system (it was then switched from Baldrige-style to generic “excellence”).