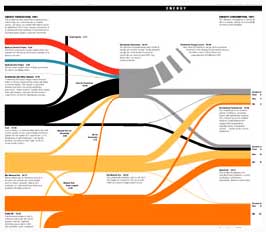 Karl Hartig displays some excellent charts that he created (for the Wall Street Journal) on his web site. The charts seem very similar to what would result from applying Edward Tufte’s ideas. Rarely do I see charts that do such a good job of visually displaying data. The lack of such effective visual display of information is another example of how much improvement could be made just by applying ideas that are already published.

Via, The best charts I’ve ever seen [the broken link was removed].