The conventional wisdom has been that expanded trade would result in the United States losing low-pay, low-skilled manufacturing jobs, said David Swenson, an economic scientist at Iowa State University. But “a lot of the jobs that we have traditionally thought of as high value, high quality, high benefits are in trouble, too.”

Partially the conventional wisdom was wrong because the wealth that exists in the world today has allowed for huge investments to be made amazingly quickly. That allowed changes to the macro economic environment faster than I can imagine any reasonable person would have expected in 1985. And partially the effectiveness of especially China (but also many other countries in Asia mainly) in improving their economy have been much more successful than could have been reasonably expected. Partially the very high wages paid, might just be too high, we will see. The success of multi-national companies in speeding up the adoption of effective management policies has also been important. Granted I believe the management practiced by most could be greatly improved but still…

I believe we can expect that there will be real competition for high value work from a wide number of countries. That is the reality of the world today. Countries that desire economic wealth are going to find that other countries want high value work also (and are not willing to seed a huge percentage of those jobs to the United States or anyone else). To retain and gain high value work all countries will have to compete with each other. Previous post on science and engineering jobs.

More from, In Global Market, Iowa Manufacturers Fight for Survival:

Two movements that are dramatically changing Iowa manufacturing floors are technology and lean manufacturing disciplines, such as Kaizen, a Japanese approach for continuous improvement.

With nearly 30 percent of the residents in Des Moines, Lee and Henry counties employed in manufacturing, said Hinkle, “it made sense to make southeast Iowa a lean stronghold.”

I had a great deal of difficulty finding statistics on this (any suggestions for good source of macro-economic statistics on manufacturing would be appreciated). Google and the others still have plenty of room to improve search results. From the WorldBank, I located manufacturing statistics from 2001 (using “value added” – the link to the details on what the figures mean on the page don’t work – I would guess the figures are in constant dollars but I can’t say for sure).

Summers conservatively estimates the company will implement 25,000 employee recommendations throughout its operations this year. The company has 3,800 Iowa employees, called members, with 11,000 worldwide, mostly in the United States.

“Those suggestions are driven by shop floor members who understand where the waste is in their jobs,” he said.

Employees are trained in lean techniques and are “encouraged and rewarded to generate and implement improvement ideas.”

Mead said about once a quarter, employees work on a lean project within their work area or in other plant operations.

A substantial determinate of where high paid manufacturing (and other) jobs will be is how effectively locations produce. By using lean manufacturing methods (and the like) and taping the brainpower of employees the odds of keeping such jobs in Iowa, and anywhere else is increased. Is it certain to work? No. But the odds of keeping such jobs without using such management improvement strategies is much worse. 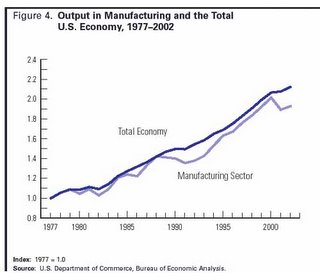 The ratio of manufacturing output to total economic output is not declining much (see chart). Yet, Quality management, lean manufacturing, applied technology, technological innovation, etc. have increased productivity to such an extent that we are increasing production and decreasing employment. I could not find the statistics but my belief is that manufacturing employment has declined substantially globally.

Jobs are leaving the manufacturing sector everywhere. Again, I can’t find a source now but my understanding is manufacturing employment in China is down more than manufacturing employment is down in the United States in the last 2 decades. How? Remember that China has radically altered their economy. What existed 20 years ago (and even 10 years ago) was employment at factories largely in name only – employees that had nothing to do. Part of that change is the vastly increased output shown above, another part is the reduction of staff at factories that now are managed to make a profit.

The way to create an economy that continues to provide good jobs is to apply the ideas of Deming, lean thinking, customer focus, statistical tools, systems thinking, etc.. We should realize that the United States was in a position from 1950-2000 that was abnormal and is not something that can be expected to return. To achieve economic success in the next 50 years will require doing what we did well last century well again, improving things we could get away with doing poorly and learning and applying new ideas (in management and elsewhere).

As I have stated before, as a county, the United States still has the advantage when looking at the likelihood of economic success in the future. But that advantage is much less than it was in 1950 or even 1970. The conventional wisdom was that the United States could move to “high value” work where we could continue to exist in the way we did in the middle of the last century.

Those who thought moving to high skill jobs was the way to protect economic gains, knew that it was only a temporary state. They implied we could take advantage of that time to become more effective and maintain a significant advantage over others. It turns a handful of countries have reached a very competitive state for even high skill jobs much quicker than most anyone expected.

The future is very bright for the world and for the United States. But the United States is going to have quite a few challengers for providing a location for high skill jobs. It will be very interesting to see what happens in the next 20-50 years. 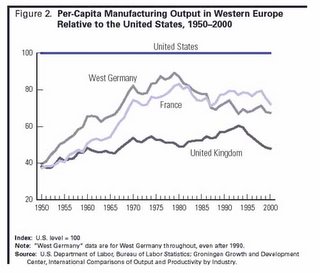 Is the United States going to be the largest manufacturer in the world 20 years from now? I doubt it, but if you have to pick one country it has at least as much chance as any other (I would imagine today many would give the odds to China, and I would as well). What other country? Japan, I doubt it. Enough of Europe forming into a country, possible but unlikely.

So I would guess China #1 and USA #2 in manufacturing in the year 2025. Hardly a failure to be the second largest manufacturing country in the world. And there is plenty that could go wrong in China and cause it to slip and not catch the United States. But we have experienced amazingly quick macro economic changes recently, so 25 years might leave room for much more change than seems likely today.

Is the United States going to have the largest GDP? I believe so. What countries are likely to do well? That is not an easy question. China and India have done very well the last 10 years. Continuing that success for the next 25 years will not be easy. Again it will be interesting to see what develops.

3 thoughts on “Manufacturing and the Economy”