This month Bill Troy, ASQ CEO, asked ASQ Influential Voices bloggers: “who influenced or inspired your management thinking and in what ways?” He discussed Paul O’Neill’s influence on his thinking; I agree that Paul has done some very impressive work in health care.

I have written about my management influences in the past: Active Management Improvement Leaders (2006) and Who Influences Your Thinking? (2005). My largest influence by far is my father, William Hunter. Here is a good example of why: Managing Our Way to Economic Success, Two Untapped Resources: potential information and employee creativity. In another post I also wrote about my early influences related to quality management as I grew up in Madison, Wisconsin.

From an early age I learned to experiment, appreciate and understand data, respect people and continually improve. These lessons were a natural part of growing up in our family.

Another influence, and natural part of growing up in our family was George Box. He was Dad’s colleague and shared all the qualities listed above; we often saw him at our house or visited their family at George’s house.

They both shared the expectation that you continually seek to learn and improve. They both shared the scientist and engineering mindset that ideas should be tested and probed and new methods and ideas discovered. They also believed that making improvements in the real world was the goal. The aim was not merely to think up new ideas but to implement them to improve people’s lives. They shared a passion for freeing the minds of everyone to allow everyone to have joy in work and life.

Brian Joiner was also around as I grew up and to a lessor extent so was Peter Scholtes. After I graduated from college and started to work I actually worked with Peter actually more than the others (I created and still maintain Peter’s website) and he had a great influence on my management thinking. Again all that I said about George and Dad applies to Peter. Peter was less focused than the statisticians (the other 3 and Deming were statisticians) on data, but they were all cut from the same cloth.

And through all of them I was exposed to Dr. Deming’s ideas and those also have had a great influence on my thinking. As you can see from the characteristics listed above that it all fits together very well, which isn’t a surprise. The reason Dad, Brian, Peter, George and Deming worked with each other and shared ideas was that the ideas they all were pursuing fit together. Dad was writing back and forth with Deming all the way back in the 1960’s and continued until he died. In Out of the Crisis, Deming asked Dad to write a few pages on the work with the City of Madison applying the management improvement ideas.

Dad had decided he wanted to help the City after returning from a summer lecturing in China on design of experiments (mainly). He worked with Peter Scholtes (at that time a City employee) on the project with the City of Madison’s vehicle maintenance garage. The Mayor, Joe Sensenbrenner, wrote up those experiences in the Harvard Business Review (Quality Comes to City Hall). Peter then went to work for Joiner Associates and soon he and Brian were working with Deming, speaking at his 2 day seminars.

Brian had previously worked at the UW-Madison Statistics department that George established. Dad followed George from Princeton, where as a under-graduate student he took a graduate course George taught. Dad was the first PhD graduate of the department and became a professor the next year.

One of the joys of working with great people is they are very likely working with other great people. So my influences spread beyond these to many others that I have been lucky enough to work closely with. 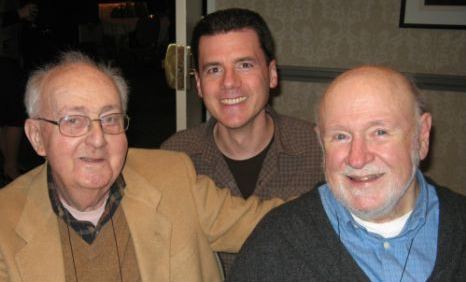 photo of (from left to right) George Box, John Hunter and Peter Scholtes in Madison, Wisconsin at the 2008 Deming Conference

The only very significant influence I have that I haven’t worked closely with myself is Russell Ackoff. And with him I have been lucky enough to not only read his words and listen to him (and met him a couple times) but also to work with people that had worked closely with him (Peter Scholtes, Gerald Suarez, Kent Lessandrini and others).

From all these people there are too many important ideas to summarize in even a very incomplete way. But reading my book Management Matters: Building Enterprise Capability and this blog provide a good idea of what I have taken from them as there is not much that doesn’t come from them (or those influenced by them).

Still a couple of core principles are to use data well (which requires learning how to do so), experiment, continually improve, and seek to improve the lives to those you work with and society. All of these influences continually sought to learn and experiment and improve their actions and the results they achieved. They also felt a strong commitment to make improvements that benefited society in large and small ways. We all can do this.

Most of us are likely not going to have as large an impact on society as they have, but that is fine. Frankly, while I believe these people have had a large impact they are largely unknown outside of a few people who care deeply about the importance of managing our organizations well.

Another thing I learned from them is the importance of cultivating a great community of experts that you are working with over the years. The above gives an extremely simple view of one small part of that community but it is many times richer and more complex. Each person had a fair amount of overlap with each of the others but also had many unique areas of expertise and connections that let them grow and contribute back to all of the others.

Related: William Hunter-An Innovator and Catalyst for Quality Improvement by George Box – The Importance of Management Improvement – The Art of Discovery

6 thoughts on “Who Inspires Your Management Thinking and Action?”