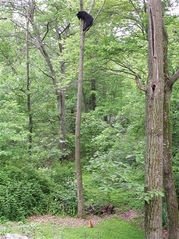 The photo shows a tabby cat that chased a bear up a tree.