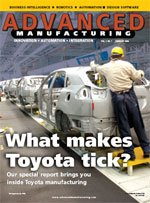 Advanced Manufacturing magazine continues the focus on Toyota with a cover article, What Makes Toyota Tick? [the broken link was removed] by Vanessa Chris

“Toyota has been coined ‘the most feared automaker in the industry.'” Just a few days ago I posted on: Fear Remains a Toyota Motivator. No matter what Toyota continues to be the focus of attention.

Every aspect of the assembly process flows flawlessly into the next – making the plant’s 157 processes seem like one. Parts from suppliers are delivered on racks that attach seamlessly onto Toyota’s assembly cells. When an assembly line is short on parts, sensors send messages to a team member’s wireless PDA, so he or she knows exactly when and what type of part is needed. Every team member here is recertified in six month intervals, to ensure optimal performance. And digital andon boards hanging throughout the facility report issues and the day’s progress – as well as any problems – in real time.

In the two-and-a-half years the plant has been in operation, team members have worked diligently to shave nine seconds of takt time off the assembly process without increasing manpower – mainly by focusing on little changes, like putting all fluids in before the final line, and ensuring carpet and seats are installed at the very end to avoid stains or damage.

Lean so lean it doesn’t stand out
In this plant, there are no new lean cells that are “under construction.” There are no pre-lean horror stories and no wide-eyed employees excited about their newly-organized work area. The lean philosophy is so deeply embedded here it’s as if it requires almost no effort at all, emphasizing the differences between first generation lean and, well, a pioneer like Toyota. “It’s tough to adapt a whole system to another system that’s already in place,” says Gerry Malloy, the editor of Canadian Auto Dealer magazine, and a respected automotive industry journalist. “It’s how (Toyota’s) been doing business from the beginning and it’s difficult for other people to catch up.”

People might get tired of reading about Toyota but when you read articles like this you see that a principle reason for there being so much focus on Toyota is that they really are doing great things.

The editor’s note, Life lessons from a car company? [the broken link was removed] is also worth reading:

These examples, and there are many more, help explain what fuels Toyota’s success. There’s no question there’s something different about this company worth a closer look – and it’s not just the top-notch manufacturing technology and advanced lean methods visible on the factory floor. True, some of these factors are “touchy-feely” things that are hard to quantify. But the way Toyota treats its workers, er, team members, also extends to the way it conducts itself with customers, suppliers, the local community, and the environment. It’s a holistic approach to running a business that is no doubt hard for many North American-trained business executives to grasp – and even harder to copy.