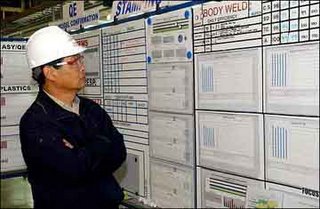 Via Evolving Excellence [the broken link was removed], Indiana plant president passes on lessons (newspaper broke link so I removed it):

Q. Is it different teaching the Toyota Production System to American team members than it is to teach it to Japanese?

A. It’s not so different. Americans are eager to learn. American team members are more serious about job security, so their motivation is higher than that of the Japanese.

The Japanese are more obedient to the boss. Americans show more individual initiative. Once they understand why we have to continue kaizen, we get a much better result than you’d expect.

Q. What are the biggest misconceptions about the Toyota Production System?

A. Sometimes it’s misunderstood as a management tool to bring cost down. Or that it’s effective even if only a portion of TPS is introduced, such as kanban. (Kanban is inventory replenishment.) That’s not the Toyota Production System.

Kanban is easy to introduce as a logistics system, but its purpose is not to reduce logistics costs. It’s a tool to bring problems to the surface. Not many people understand that. As we reduce inventory, all problems come to the surface, and that way you solve problems and your system gets stronger.