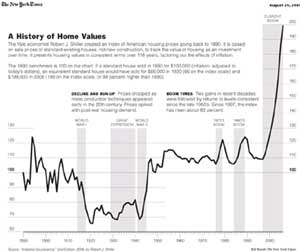 I wrote about the housing bubble in April of 2005:

I am not convinced that we are seeing a bursting bubble. Certain location are at a risk to experience such declines (most of those areas went up more than 100% in the last 5 years so they still would have large gains over the last few years). The market certainly has moved to the point where a transition to a bursting bubble is much closer than it was a year ago. Even several years ago many proclaimed the bubble was ready to burst, in the face of continuing rapid increases in prices. Today we are essentially at a flat market but the momentum is all toward a decline in prices. So it is certainly possible this post will look foolish in 6 months or a year but I’ll take that chance.

What is happening now is what always happens when the real estate market cools – prices stagnant (note that is not a sharp decline in prices) and inventory increases. Buyers hold out (no longer fearful of seeing every house they want snapped up before they get a chance to make an offer) and many sellers hold on (they don’t like to cut prices – they would rather wait longer and get the price they have their hearts set up, not all of them refuse to make substantial cuts in price but most do). Therefore the inventory increases (which does get some sellers to decrease prices some but most often not a huge amount) and prices stagnate.

Historically a 90 day inventory is considered the dividing line between a sellers market (under 90 days) and a buyers market (over 90 days). In many booming areas the inventory has been running below 30 days for years. So now people look at 90 days and think the market has “burst,” which is not accurate.

Most of what I have seen shows dramatically declining sales. I have not seen much that shows prices have declined on average (in many locations prices are between -3% and +3% from last year which is certainly not going to make investors rich but is far from a bursting bubble).

Those that expected real estate prices could only go up might be disappointed (but who does that surprise?). Still sharp decline (other than some local spots which might include parts of Florida, California, NY…) have not been seen (real estate data can often take something like 3 months to give a clear picture of what is going on). And other than local conditions (sharp decline in jobs…) the only significant chance of such sharp declines, I think will be from mortgage defaults. That seems to put me at odds with most others so I may well be wrong. Even if we do see declines of over 20% I seriously doubt we will see declines that even erase half of the gains of the last 6 years (in which case would a shrinking bubble or some such metaphor be more appropriate than a bursting bubble – which was accurate for the .com collapse).

Another likely culprit in cutting housing prices are rising long term interest rates (but again this will likely just cause small declines in price, in my opinion, and contribute to the slowing of turnover). Most people care more about their monthly payment than the price of the house when looking to buy. And as interest rates increase the mortgage payment required for the same price increase quickly. Therefore any time mortgage rates increase their is a great deal of pressure on home prices. So far, even with large increases in short term rates mortgage rates have not increased much. If they do that will add to the decline/dampening increases of real estate.

Business Week includes a story on the coming increases to mortgage payments for those who took out adjustable rate mortgages, with the shocking title: Nightmare Mortgages. If those taking our such risky mortgages cannot pay the increased monthly payments and are forced to sell houses in large numbers that could create a bursting bubble. A vicious cycle could really be created if the economy slows down and large numbers of workers lose there jobs and can’t afford their mortgages and are forced to sell… But I do not see that as likely.

Combining the risks of leverage, adjustable rate mortgages, a high percentage of income devoted to mortgages and the volatile job economy we now must take for granted is not something to take lightly. I previously posted on How Not to Convert Equity (disputing CNN Money’s claim on how to “convert home equity”). If the regulators, mortgage lenders and borrowers together combined to take on more risk than was wise then the bubble could indeed burst.

But if we don’t see such forced sales (due to owners not being able to pay their mortgages) I think the far more likely scenario is a slowing real estate market where the “losses” are more long slow declines (say over 5 years the prices are down 5%) or long very slow increases in value (say only up 5% in 5 years).

Two strong macro economic factors support rising home prices (though maybe not to the extent to which they have risen): increasing population and increasing jobs. I would imagine the reduction in family size (more single people…) contributes also but that is just a guess. If these strong demand trends were decreased that can have large impact but normally those will play out over many years.

I do think the decrease in the real estate wealth effect will slow the economy.

2 thoughts on “Housing and the Economy”