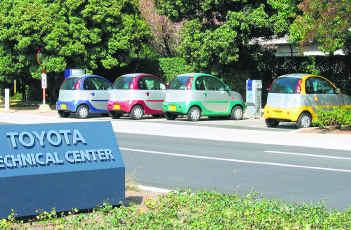 A visit to Toyota City: In Toyota land [the broken link was removed] by Vinod Jacob:

When I was a little boy it was fascinating to read about Toyota’s vision for non-polluting vehicles to replace existing versions. I used to marvel at the sketches of the futuristic small vehicles plying inside the Toyota campus. A visit to the Toyota headquarters proved this to be a reality. Just outside the Toyota technical centre are the E-com vehicles put on a charger.
…
Visitors are welcomed by robots playing the clarinet.
…
The `Toyota way’ is explained through audio-video shows that cover concepts such as JIT (just-in-time manufacturing system), Kanban cards, andon cords, synchronising dolly for instruments, and raku-raku flexible seats.

Another article by Vinod Jacob – Ford centenary: A legacy revisited