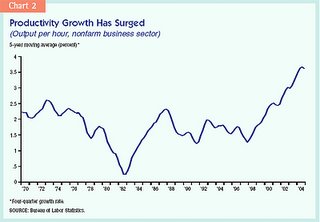 The Dallas Federal Reserve white paper, Supply Chain Management: The Science of Better, Faster, Cheaper [the broken link was removed] by Thomas F. Siems provides a macroeconmic view of what to be thankful due to the practice of lean thinking:

Through better information engineering, supply chain improvements have resulted in a reduced bullwhip effect, lower inventory levels, reduced logistics costs, and streamlined payments. These improvements appear to have helped produce macroeconomic benefits such as more stable economic output and higher productivity growth.
Mass Production Era. In the early 1900s, Henry Ford created the first moving assembly line. This reduced the time required to build a Model T from 728 hours to 1.5 hours and ushered in the mass production era. Over the next 60 years, American manufacturers became adept at mass production and streamlined supply chains with the help of scientific management methods and operations research techniques.

Lean Manufacturing Era. But in the 1970s, U.S. manufacturing’s superiority was challenged. Foreign firms in many industries made higher quality products at lower costs. Global competition forced U.S. manufacturers to concentrate on improving quality by reducing defects in their supply chains.

Starting in the early 1970s, Japanese manufacturers like Toyota changed the rules of production from mass to lean. Lean manufacturing focuses on flexibility and quality more than on efficiency and quantity. Significant lean manufacturing ideas include six-sigma quality control, just-in-time inventory and total quality management.

Ok, I don’t think most experts would call six-sigma a lean manufacturing idea (and I certainly don’t) but this is a member of the dismal science [the broken link was removed] singing macro-economic praises for the practice of lean thinking, so I think that point can be overlooked.

One thought on “Be Thankful for Lean Thinking”