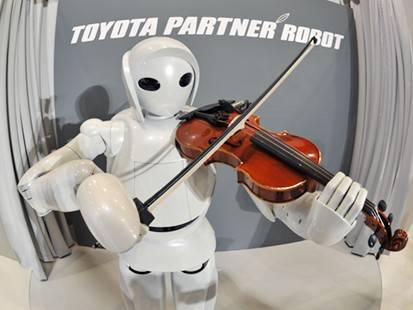 But Toyota’s new robot played a pretty solid “Pomp and Circumstance” on the violin Thursday. The 152-centimetre [about 5 feet] tall white robot used its mechanical fingers to push the strings correctly and bowed with its other arm, coordinating the movements well. Toyota Motor Corp. has already shown robots that roll around to work as guides and have fingers dexterous enough to play the trumpet.

Toyota President Katsuaki Watanabe said robotics will be a core business for the company in coming years. He says Toyota will test out its robots at hospitals, Toyota-related facilities and other places starting next year. He hopes to see partner robots in use by 2010.

“We want to create robots that are useful for people in everyday life,” he told reporters at a Toyota showroom in Tokyo. Watanabe and other Toyota officials said robotics was a natural extension of the automaker’s use of robots in manufacturing, as well as the development of technology for autos related to artificial intelligence, such as sensors and pre-crash safety systems.

As I have mentioned before Toyota continues to invest and plan for the long term. And that future is not limited to automobile manufacture. We posted previously on Toyota’s partner robots. The Curious Cat Engineering Blog Robotics category has a great deal of posts on robots.

On the Toyota web site they list the following areas of non-automotive Toyota business (I don’t understand why robots are not included here): financial services, new business enterprises, marine and most surprisingly Biotechnology and Afforestation.

Toyota states: “Biotechnology may seem far removed from the auto industry. It is, however, closely related to automaking in the context that they are both aiming to achieve a sustainable society, and their close relationship can be seen in the new Raum, launched in May 2003, which uses parts made from bioplastics.” Even with Toyota’s explanation the biotechnology business seems like a business with little connection to their existing operations to me.

Toyota aims to put robots to use early next decade

Under its recently crafted long-term plan dubbed “Global Vision 2020,” Toyota aims to make the robotics field one of its core businesses by 2020.
…
Toyota envisages its “Partner Robot” initiative helping people in four fields — domestic duties, nursing and medical care, manufacturing, and short-distance personal transport. Watanabe said Toyota hoped to boost collaboration with academia and the government to achieve practical applications for the robots, while remaining open to cooperation with other companies in the field.