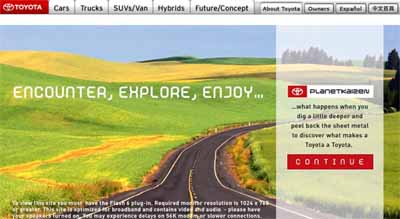 Toyota has a section on their web site called Planet Kaizen [the broken link to www.toyota.com/planetkaizen was removed, this is a rare instance where they are doing us a favor by removing this poorly designed application from the internet]: “what happens when you dig a little deeper and peel back the sheet metal to discover what makes a Toyota a Toyota.”

It requires Flash to view Planet Kaizen. I think it has amazingly bad visual controls (as do many flash applications). I can’t figure out why it would be done in flash – other than some marketing person, or IT person, thought it would be cool. I certainly don’t see how kaizen practices could have produced such an application. It seems to me one of the examples of how far Toyota still has to go.

Of course, as an automobile manufacturer failing to develop web applications well, is better than failing at manufacturing cars well. I would guess that this “planet kaizen” was not created by Toyota employees but instead outsourced to someone else. If it was done internally, I think Toyota’s management of marketing with technology may be in as much need of help as GM’s entire management is. In any case the non-manufacturing parts of Toyota, while some are managed well, still have plenty of room to improve.

One thought on “Planet Kaizen”